LAYING THE SMACK DOWN: Street Fighter Legacy Fan Film Lands On Its Feet 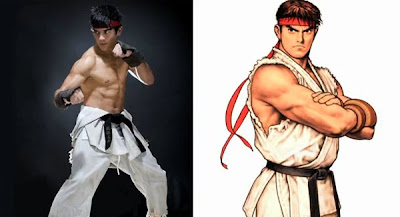 We all have a Street Fighter memory or two. For me it was that in tournament mode Chun-Li was always harder to beat then M. Bison, and that while I should've played with and got the feel of more characters, I generally used every 20 cent piece I put into the game, setting the opposition on fire with Dhalsim's 'Yoga Flame'.

This week Joey Ansah, from The Bourne Ultimatum (he was the guy that fought Matt Damon in the awesome street fight in Morocco) and friends, finally unleashed their pet project... a wicked fan trailer, made in honour of the arcade legend. Over a year in the making - and it shows - this 3 minute marvel is an amazing sign of what fans can do in the name of inspiration. Check out right here...

Wicked huh? Joey's pretty keen on doing more live-action features in the world of kick's, uppercuts and hadouken's - so if you like what you see let him know, either on the official YouTube page (which also has some sweet behind the scenes videos), the Street Fighter: Legacy Official Facebook Group, or joeyanasah.com
Posted by IADW at 10:53 am