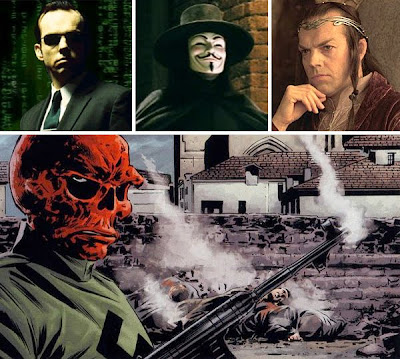 As an actor Hugo Weaving has already had a good innings. Agent Smith in the Matrix, V in the brilliant V for Vendetta, Elrond in The Lord of the Rings (and The Hobbit - when it too finally gets off the ground), and as the voice of Megatron in Michael Bay's Transformers movies.

Now he's officially the man Marvel Studios has selected to flesh out the role of The Red Skull, in 2011's The First Avenger: Captain America.
While the actor and role have long being rumoured, the official word locking in this great choice of casting is still awesome to have.
Posted by IADW at 8:56 am