MOMENTS IN COOL: Batman Deduces the Identity of the Hyperclan 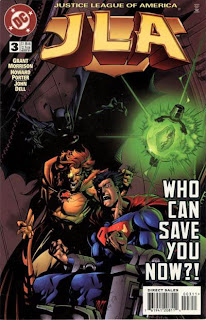 In '97 the "big-guns" of the Justice League of America got back together, united by the notion if the League was to remain earth's premier unit of defense from all threats foreign and domestic, it needed a line-up based on it's premier heroes. That was until the Hyperclan showed up out of the blue, and stole their thunder right on the White House lawn.

Executing super-villains, creating vegetation in deserts, and other events in the name of spectacle, the Hyperclan quickly gain public favour and move to take out the suspicious JLA, in order to ensure the world falls gratefully at their feet. Martian Manhunter goes offline. Aquaman, Wonder Woman, Flash and Green Lantern are all beaten and taken back to the Hyperclans Artic HQ, as is a kryptonite-weakened Superman.
What about Batman? He's shot out of the sky and left to burn in the wreckage of his own Bat-plane... but that's all the evidence Bats needs to take these suckers down.
Braking into their stronghold, four Hyperclan members set out to bring in Bruce Wayne's alter-ego, after "only a man" easily took out their ally, and strung him up with "I know your secret" pinned to his robes. Confronting his next contestants, Batman delivers his genius first hand; 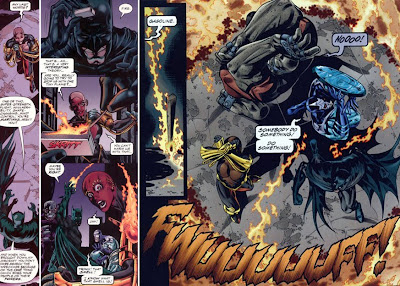 Followed by possibly the coolest Bat-panel of all; 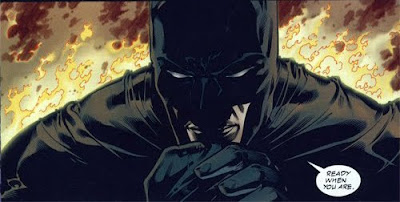 While Green Lantern later quips Batman only taking out four of the villians suggests he's slowing down, what writer Grant Morrison made was a Batman who didnt just fight, he out-witted, out-played, and out-matched his opponents, laying a trap for them inside their own base in complete calm and style.

Narcissistic? Yes - but let's face it, nothing beats Bats when the detective side is played out - and I mean nothing, Hyperclan included.
Find this moment in the tradepaperback JLA: New World Order at Amazon.com
Posted by IADW at 10:16 am