CLOSE CONTENDERS:
TOM STRONG AND THE ROBOTS OF DOOM #1 (of 6) (Wildstorm): One of Alan Moore's best pulp creations is back, in an all-new tale that sees the world transformed into a Nazi planet run by Tom's son, just as Tesla's wedding celebrations get under way? Hope that's not an omen!

ABE SAPIEN: THE ABYSSAL PLAIN #1 (of 2) (Dark Horse): The Hellboy star dives into an undead mystery, deep on the ocean floor. Written by Mike Mignola himself and with covers by Dave Johnson, this pre-B.P.R.D tale is not to be missed. 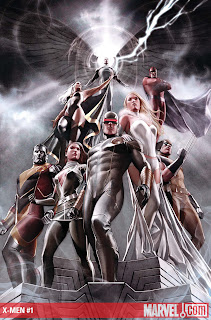 X-MEN #1 (Marvel): What's a comic collection without an X-Men #1 or two? This time round all the popular kids (sans Nightcrawler) are in the one book for the self-explanatory Mutants Versus Vampires. Something tells me a guy of faith that can leap out of shadows and kick butt would come in real handy about now.

SHADOWLAND #1 (of 5) (Marvel): Get ready for Street Fighter Marvel style. With Daredevil enforcing his own martial ninja enforced law on Hell's Kitchen, NYC's street-level heroes, Spider-Man, Ghost Rider, Iron Fist, Punisher and more, stop in to set him straight - but not before tangling with each other first!
Posted by IADW at 8:21 pm