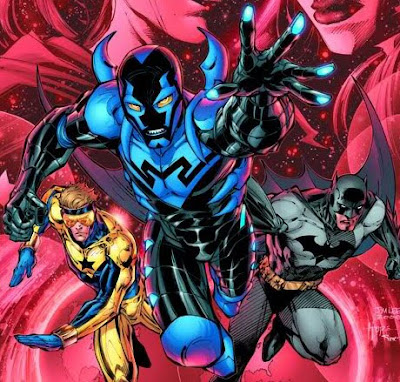 Well, when Geoff Johns said the new DC Entertainment would be pushing next tier DC characters out into the mainstream public, he wasn't joking. From the super-scribe today on Twitter;

BLUE BEETLE NEWS from DCE!! We have a live-action test of Jaime Reyes’ scarab activating his suit. It. Is. Awesome… we’re hoping to develop a live-action show. Fingers crossed!

Obviously the plans are still in the early stages, but this would be an incredibly cool property to bring to life - and even possibly work in the legacies of the prior Blue Beetle's, to really give it that full DCU flavour.

Jaime Reyes, a Texan high-school student, discovered he had the ability to become the Blue Beetle, after the Blue Beetle Scarab grafted itself to his spine overnight. Giving Jaime acecess to its fantastic powers and armour, the scarab can also take control and use its powers for its own defense and purposes. Currently Blue Beetle is a reoccurring guest on hit-cartoon: Batman: The Brave and the Bold.
Posted by IADW at 11:07 am