DC hits September with all guns blazing, thanks to a series of war-comic one-shots and more. When it comes to their cover art for the same month, here are four of the biggest guns in the arsenal. 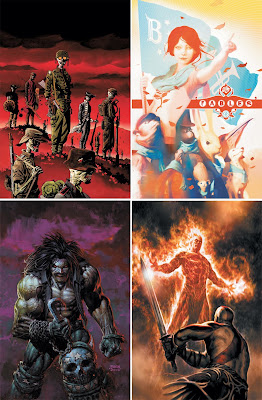 ONE TO WATCH: While it’s not featured in the above, look for Dave Johnson’s cover to Freedom Fighters #1 to be a cover worth framing. Tying into DC’s war hero theme, seeing Johnson tackle Uncle Sam, Black Condor, The Ray and more, will be worth the cover price alone!
(Shown image: variant cover by Shane Davis).

For their full September solicits visit the DC Comics website.
Posted by IADW at 10:25 am