CRUNCH: The latest series of TV-hit Fringe, featured some of DC's most famous covers, altered inline with the shows alternate setting. Now you can own the 'twisted' art involved, as well as a few sweet cover sketches all done by the Wildstorm crew, a little after 7pm PST right here on eBay - jump 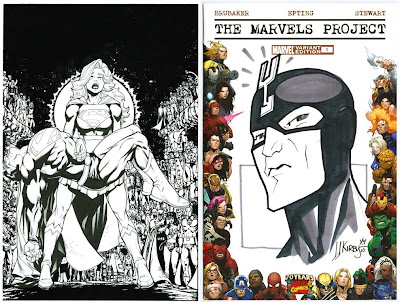 CRUNCH: She brought so much to the character of Wonder Woman in the 70's TV series, and Lynda Carter's tribute to the character, released as part of the Wonder Woman 600 celebrations, shows her insight into the character is still better than many of those who have scripted her adventures since.
"If Einstein is right, and imagination is more important than knowledge, then maybe what we need is to “wonder”…to open our minds and our hearts, to believe in what we cannot see."

Wonder Woman fan or not, check out the rest of this living icon's thoughts on why Wonder Woman is still relevant, right after the jump.

CRUNCH: Want in on The Thanos Imperative, but afraid you've missed the launch? Marvel's answering your prayers, re-releasing The Thanos Imperative: Ignition in a second printing this Wednesday. Just look for the variant cover of ol' purple skin busting free to know what to grab.
Posted by IADW at 6:57 pm