MOMENTS IN COOL: Daredevil vs The Hulk 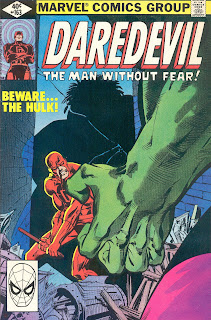 For anyone Daredevil vs. Hulk seems like a quick recipe for blind-lawyer pancakes. And while it pretty much is, this is also the issue where Ben Urich first deduced Matt Murdock's secret identity, but not before the mindless, rampaging Hulk figured it out first.
In these days Daredevil was just ramping up. Roger McKenzie's scripts were been knocked out of the ballpark by Marvel's latest 20-something rising-star; artist Frank Miller and inker Klaus Janson. Only having recently joined the title, Frank brought with him a pulp-noir style and level of detail unmatched at the time.
Kicking straight into round one, a plain-clothes Matt calms the monster he once defended in court, by asking for his trust in helping him find the source of his rage, Bruce Banner.
While I always felt Bruce and Matt should hang-out a bit more, their plan to get the Hulk calmly beyond New York City proves even nuclear scientists can have an epic fail, as Banner opts for the subway. Lost in the hustle, bustle and smoke, Bruce's anger kicks in, activating his infamous change and round two for Murdock, this time as Daredevil.
While Matt's efforts to calm the Hulk are hindered by the actions of NYC's finest, Frank's camera angles of the conflict are literally bone-crunching. That realism I was talking about? Take a look at this; 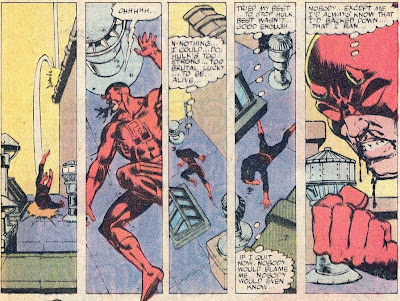 Attempting one last suicide gambit to reason with the beast, Matt throws his all into the battle and delivers the ultimate blow by explaining Hulk is actually Bruce Banner. Except it backfires. The Hulk's rage slips into overdrive and he slams ol' Hornhead for six.
Out of breath and severely beaten, Daredevil struggles to stand, knowing death is only a few moments away. His last-words? The scene that makes it all worth while... 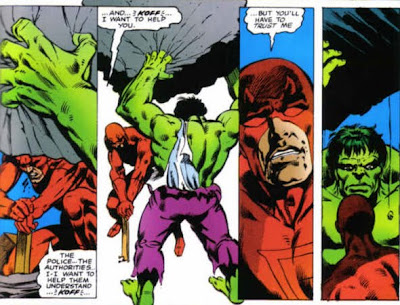 Just look at that again. That's the detail and expression of Frank Miller at the start of his career. Wow. Just wow. I love the little pebble falling in that last frame to - backing up the penny has dropped for the Hulk.
How does the Jade Giant cope with the realisation of all he's done? Keep an eye out for Daredevil #163 'Blind Alley' to find out!
Posted by IADW at 10:40 am