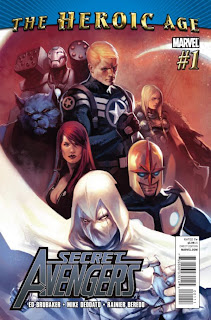 "You have a chance to be a man. Step up and take it, or be a child forever"

A book about undercover 'capes' is no longer mission impossible, it is Secret Avengers #1

It's an ironic fact that the best book so far from Marvel's 'Heroic Age' is also supposedly one of the darkest, but Secret Avengers #1 is a master-class in 'how to do first issues'. In fact it delivers the only true Steve Rogers I've read, outside of Captain America, since his rebirth.

There's no endless set up, the action starts right on the first page, and what begins as a clandestine sting on a petrol tycoon, ends with a team rocketing to an abandoned colony on Mars, while an invader, who may or may not be one of their oldest allies, commandeers their earth-bound HQ.

Not satisfied with going from Earth to Mars in just 28 pages, writer Ed Brubaker pulls his diverse bunch of heroes together though some really sweet character moments, which evolve the story, give them a commonality, and highlight how each member pulls their own weight in a team that already includes the likes of War Machine and Beast. 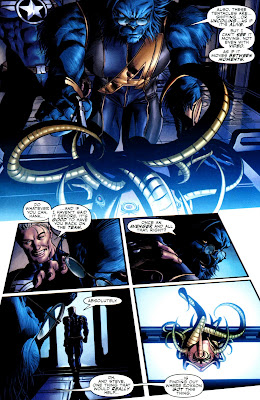 Speaking of the perennially popular Beast, the other standout aspect of this book is Mike Deodato's art. The leaps this guy has made since I first saw his pencils on DC's Wonder Woman and Image Comics' Glory!

Here he nails the atmosphere of a 'cloak and dagger' title, delivering one of the best versions of Beast I've ever seen. In fact if Hank McCoy gets his own solo series back, Mike should be the first guy Marvel heads to to get behind the pen.

With issue two just around the corner there's still time for you to get behind this book too. If it stays on this epic path it will easilly be the talk of the year, and definitely something that you should reward yourself by reading - there's no secret in that.
Posted by IADW at 8:55 pm