May was the month when universes (universi?) collided. DC and Marvel both launched high-profile books head to head. Walking away with the biggest smile? The House of Ideas. 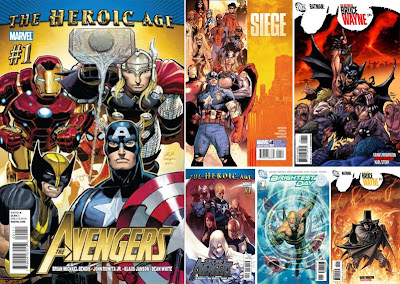 With a sales gap of over 10% unit share, Marvel's Avengers books took three of the top six positions, all of which were above DC's key event launch Brightest Day. Bruce Wayne's return to the bat-world helped steady the ship, and with the Top 6 tied at three places each, eyes are turning to see how things shake out in June, when the initial buzz has died down. For the full wrap-up hit the jump. 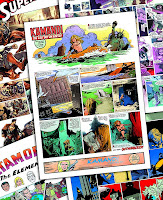 THE WINNER ON THE DAY: WEDNESDAY COMICS (Hardcover) #6 Top Trade Paperbacks list I've blogged ad nauseum on what a great idea and product DC's Wednesday Comics was - but would enough fans rally to the retro-newspaper sized strip, collected in one giant volume, to show DC there was enough demand for a round 2? Even with a whopping $49.99 (US) price tag, the answer looks like 'Yes'!
Posted by IADW at 7:56 pm