THUNDERCATS WILL ROAR AGAIN IN 2011 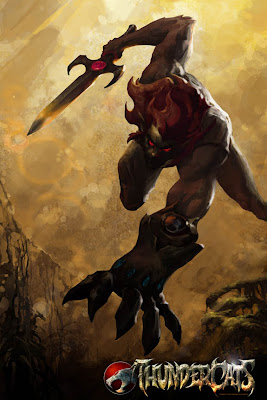 Warner Bros. Animation are looking at taking fans off world in 2011, by tripping back to Thundera - home of 80's icons the Thundercats.

Don't go thinking this is the Lion-O of old though, Warners say the new series will be an anime-style "21st century re-imagining" of the hit franchise, and are teaming with Japanese animation Studio4°C (Gotham Knight) to pull it off.
As you can see this first teaser image shows they're well on their way. Starting with the story of Prince Lion-O's rise to the throne, the high-stakes meets swords and science series will have Cartoon Network's audiences the globe over screaming 'Thundercats Ho!' once again in twenty-eleven.
Posted by IADW at 7:14 am