HIT PICK TO CLICK: BATMAN: ODYSSEY #1 (of 6) (DC): Those who think lightning can't strike twice need to pick up this little number, written and drawn by one of the definitive Bat-artists, Neal Adams! It's guaranteed history in the making - right from the first page.

CLOSE CONTENDERS:
BRIGHTEST DAY: THE ATOM SPECIAL #1 (DC): A pit-stop between starring in Blackest Night and Adventure Comics, the Justice League's minature Marvel is back in this one-shot special with adventures that blur the scientific with the fantastic!

DOCTOR SOLAR, MAN OF THE ATOM #1 (Dark Horse): Jim Shooter pulls a Neal Adams, returning to the pulp hero he helped make famous; Doctor Solar, Man of the Atom! Blessed with power beyond imagination after a nuclear incident, Doctor Solar is about to discover the same accident has also birthed a whole new kind of evil... 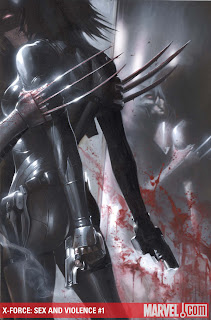 X-FORCE: SEX AND VIOLENCE #1 (of 3) (Marvel): Geez it's hard being Wolverine. All Marvel's main mutant wants is a little 'reload' time with the gun-totting Domino, however the Assassins Guild has marked her for dead. Que the blood, claws, sex and guns, all rendered by super-hot painter Gabriele Dell'Otto

MARVELMAN FAMILY'S FINEST #1 (of 6) (Marvel): Now Marvel owns the rights to one of England's most popular comic-book characters, it's time to flip back to his best 50's adventures - before Marvel brings Marvelman, Kid Marvelman and family roaring into it's future!
Posted by IADW at 8:19 am