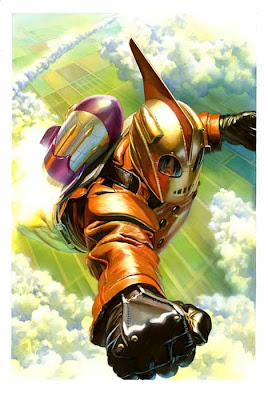 One of the inter-company cross-overs I have always held out hope for, is 'Adam Strange meets The Rockeeter'. Not only are they two of my all-time favourite characters, the contrast between the two would make for some really awesome comic-book momments. 1930's America vs. Alien cultures, Nazi's vs. well alien Nazi's - see, it sells itself!

Now IDW announce they are going to do the next best thing, by releasing a four issue anthology Rocketeer series in 2011, with a percentage of profits going to Leukemia research, at the request of late creator Dave Stevens' mother, Carolyn.

"Mike Allred is writing and drawing his, Kurt Busiek is writing a story for Michael Kaluta, John Cassaday and Darwyn Cooke are both writing and drawing their stories," Dunbier said. "There will be some pin-ups by Geoff Darrow, Art Adams, Jeff Campbell, Mike Mignola, a bunch of different guys."
Posted by IADW at 11:50 am