Flashback a few years and one of the loudest publishers on the block was CrossGen. A publisher that pushed super-heroes aside to focus on sci-fi and fantasy books, like Sojourn and Crux, pirate drama El Cazador and Victorian detective book Ruse.

Sadly, despite some fantastic titles, the line folded and was later acquired by Disney. Now the mouse's wallet has stretched to buying himself a matching 'House of Ideas' playset, Marvel has teased they are bringing a redesigned 'CrossGen' brand back, to give them a bit more strength in genre publishing.

While no titles, characters or creative teams were named, be sure to watch this space. These were brilliant concepts and it comes as sweet news, that Marvel is dusting the brand off for further action.

* Jeph Loeb and Ed McGuinness leave Hulk with #24, to prepare for Avengers 3. A Cap/Iron Man/Thor book with adventures from all points in time * The new Hulk team will be the Atlas gang of writer Jeff Parker and artist Gabriel Hardman * Kraven and the Black Panther were added to the 'Who Will Be The Next Man Without Fear?' suspects

On a side-note; Marvel also released the first official image of the Destroyer armour from the upcoming Thor movie: 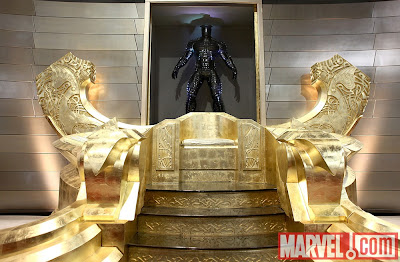