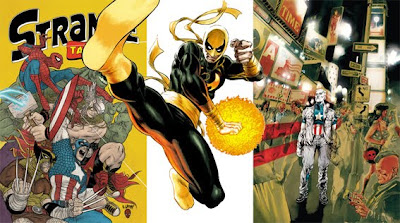 The Mondo Marvel Panel hit hard and fast. Here's a rundown of the new books and character hooks that were revealed.

The Sweetest Pick: January's Rocket Raccoon and Groot will have a cover by Mike Mignola and be written by Dan Abnett and Andy Lanning. 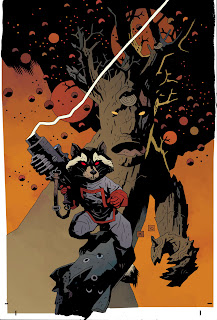 Four new Cap books are on the way, including Captain America: Man Out of Time, which reunites writer Mark Waid with the character.

Iron Man/Thor by Abnett and Lanning launches this November.

THE CRUNCH: Rom, Space Knight will appear in an Avengers story * The Ultimate line expands with October's Ultimate Thor  by Jonathan Hickman and Carlos Pacheco, and December's Ultimate Doom by Bendis * Loki gets his own book this October * Araña will take over as Spider-Girl, Mayday Parker bows out with Spider-Girl: The End * Illuminati are back in trouble in Avengers #7.
Posted by IADW at 3:04 pm