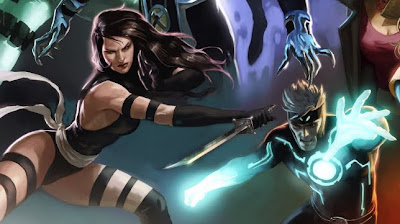 The X-Men Panel at Comic Con could've easilly ended with the Marko Djurdjevic multi-cover unifing image below (like the Avengers one here and the Spidey one here) and still gone out on a high. Havok as part of Uncanny X-Force? That would be awesome.

While people were stunned by this art other x-folks talked about;

Writer Charlie Huston and artist Juan Jose Ryp's Wolverine: The Best There Is series will look ahead rather than at the Wolvie's past, when it launches in December

Uncanny X-Force begins with the resurrection of Apocalypse, and the rekindling of the Psylocke/Archangel relationship

THE CRUNCH: The X-Men will interact more with the Marvel U * Longshot and Rahne Sinclair will join X-Factor * This panel's 'Who is the New Man Without Fear?' teaser featured Gambit, (others featured Nova) * Generation Hope debuts five young mutants in November * New Mutants will go "brutal" in a pay-off storyline.
Posted by IADW at 9:51 am