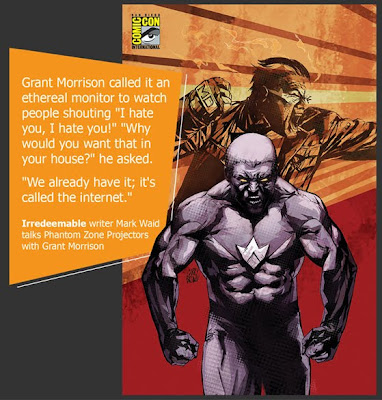 Writer and Chief Creative Officer Mark Waid, has announced the time is finally right for his BOOM! Studios hits, Irredeemable and Incorruptible to start crossing over, with one corruptible character from Irredeemable about to jump ship.

THE CRUNCH: Irredeemable artist Peter Krause was found after submitting art on the company's online forums * Waid likes writing Incorruptible's Max Damage as a reformed villain who is repentant but not apologetic * Modeus's hate of the Plutonian will be revealed in Irredeemable #17, in a scene Waid recovered from writing by taking a "nine-hour long shower."
Posted by IADW at 6:53 pm