Everyone knew Stan Lee would go 'BOOM!' it was only a matter of time. Now the three latest creations of the living legend, will debut in an all-new line of books from the red-hot publisher, overseen by both Mark Waid and Stan 'the Man' himself.

For the skinny on those books, their wicked unifying cover design and the folks working with Stan to make them happen, check this out;


STARBORN: Writer: Chris Robertson (Do Androids Dream of Electric Sheep) Artist: Khary Randolph Released: December Plot: Found your place in the world or feel like you're still waiting in line? Meet Benjamin Warner, he's an average joe who's stood in the que dreaming of an escape since birth. Now he's about to inherit a galactic empire...

THE TRAVELER: Writer: Mark Waid (You name it) Artist: Chad Hardin Released: November Plot: Having the ability to remix time and 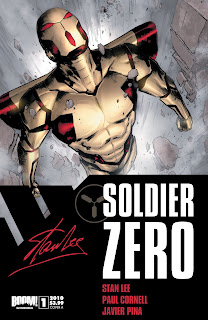 space is pretty good for kicks, but what happens when the man who can go anywhen, goes one step to far?
SOLDIER ZERO: Writer: Paul Cornell (A DC exclusive, but still allowed to play ball here) Artist: Javier Pina Released: October Plot: 'It's only your environment that limits you' Wheelchair bound Stewart Travers has defined that statement all his life. Now an alien symbiote gives him the chance to do the same on a galactic battlefield he never knew existed.
Posted by IADW at 7:24 pm