CRUNCH: Alex Ross has done some of the quintessential Justice League images, and now with Comic Con on the horizon, the superstar has taken one of his most iconic League shots and replaced the characters with Earth's Mightiest. When you get tired of drooling over his new Avengers pic (you can see Goliath and the Wasp in the image can't you?), you will find signed copies of Alex's homage to himself at the Con's Every Picture Tells A Story booth. (L.A Times)

And just for good measure, the Justice League version... fight!

CRUNCH: Speaking of San Diego Comic Con, while it is only mere weeks away, the list of exclusive goodies that will be on offer is up now on the sci-fi mecha's website. Featuring action figures and statues of everyone from Skeletor to Tron, Lion-O to the T-1000 it deserves a squizz even if this year that's as close as you are going to get. Jump
CRUNCH: He was one half of the dynamic duo that flung Captain America up the sales charts, and now upcoming Fantastic Four artist Steve Epting has a print of Cap in his WWII get-up fit for framing. Available for sale from his very own blog, you can buy one to do just that right after the jump. 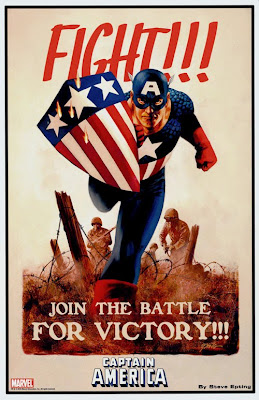