OFFICIAL ROGUE COVERS FOR THE ONGOING MARVEL SERIES THAT NEVER WAS 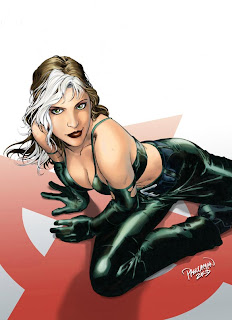 No X-Man (or woman) it seams holds more of a place in the hearts of fans than the sultry southern belle, Rogue. A natural hit with drawing characters who pack a hell of a punch, Carlo Pagulayan has posted two Rogue covers, made for a 2005 solo series, before Marvel put the series on hold and created "other plans for the character".

Having recently wowed audiences with a knockout run on The Hulk, Carlo's covers can only tease at what might have been. With the cancelation order

coming not long after the first issue got under way, colours to the debut issues cover (left) were done by Brad Anderson, while Carlo himself coloured his own pencils for cover number 2 (top). Amazing stuff - especially as it was only his second attempt at digital colouring!

To see more of Carlo's great behind the scenes art, including; Son of Hulk sketches, Hulk pencil pages and Spider-Man, Iron Man and Hulk rendered in 3D click the jump.
Posted by IADW at 11:56 am