THE SCENE OF THE CRIME: By now we all know that David Finch will be pulling double shift, to write AND draw a brand new ongoing bat-series called Batman: The Dark Knight. Here's a couple of clues from the David's various web interviews on the gothic, supernatural-noir detective story that you might have missed, that will help you decide if this series will murder the competition (and your comic buying budget) when it launches this November.

CLUE #1: 'The Challenge' - Finch on Newsarama: "It's a street level book, very hands on, down and dirty. That's just more my style. He's going to be dealing with mysticism, dark arts, and demonology. All things that are well outside of his comfort zone. The challenge for Batman will be to pit his brains and grim determination against forces that defy logic and fear." 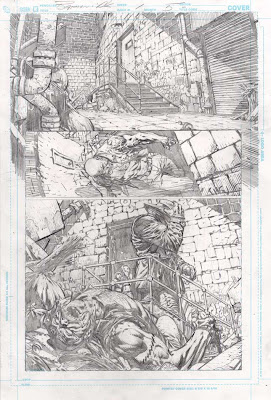 CLUE #2: 'The First Villain' - Finch on CBR: "Killer Croc, right away. Killer Croc actually appears very early in Jim Lee's initial run on Hush, and I think he was the first villain that appeared in Brian Azzarello and Eduardo Risso's run. I didn't want to copy what they were doing, but I loved that and I loved the character, so it's a bit of a nod to some of my favorite Batman stories."
CLUE #3: 'The Co-star' - Finch on Newsarama: "The Demon plays an ongoing part in the book. Jason Blood is very helpful to Batman when it comes to understanding his enemy."

MOTIVE: Undecided? Then be sure to read the full interviews on both CBR and Newsarama, before checking out Batman: The Return, an October one-shot written by scribe Grant morrison, with Finch on art. It will set-up the direction of Batman: The Dark Knight, and no doubt stir up plenty of conviction from fans in the process.
Posted by IADW at 9:44 am