GET YOUR ROCKS OFF: Thing to be CGI in 'Fantastic Four Reborn' Movie

I confess, when the first Fantastic Four movie from 20th Century Fox came out I thought it was great. Not just any 'great' either, but 'round up your non-comic fan friends and take them to see it - great'.

Which I did. Then when they left the theatre spewing fire and brimstone for having sat through it, I was still competely invisible to where they were coming from. The only point I agreed was a bit of a stretch, was despite turning to CGI for the other three, Fox had decided to wrap the amazing acting talents of Michael Chiklis/The Thing in orange foam. Well, no more.

Fox has let slip a couple of facts about the revamp of Marvel's first family on the big screen, and chief among them is that the ever-lovin' blue-eyed Thing will be a 100% CGI creation in Fantatic Four Reborn.

For the other news and why CGI is a great idea, click on through... 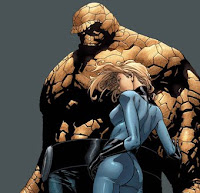 This is awesome news, in that while audiences maybe becoming a little jaded with CGI-overkill, and few are yet to meet the same standard shown by Gollum in the Lord of the Rings trilogy, the Thing is just like the Hulk - no wearable suit can do his scale justice.

The other key note was that Fox's work on Fantastic Four Reborn is on hold, until shooting on X-Men: First Class wraps, with filming on the young mutants only beginning September 21st. This in itself isn't all bad news for the four, as it will provide the studio with enough thinking time to do things right.
With Galactus, the Negative Zone, Dr. Doom, the Skrulls, the Inhumans and more within their character library, the FF are definitely block-buster material. Thing being CGI is a definite step in that direction.
Posted by IADW at 10:00 am