If Ghost Rider ever traded in his old two-wheel set-up for eighteen, he’d probably cruise around in something allot like this. 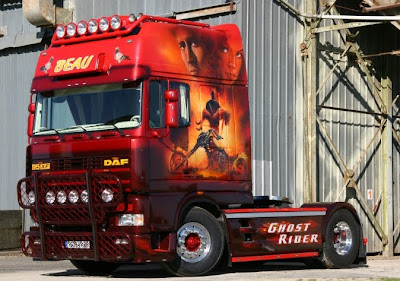 A French rig, the driver of the 'Ghost Rider' Beau Daf XF95, says he’s pretty used to random folks popping up to him to get a picture of his ‘Spirit of Vengance’. I know I would, even if I had to flip a u-turn and follow him a few miles, it's not often something like this passes you on the highway. 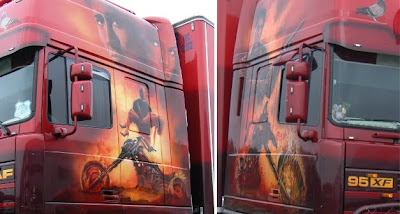 Keeping with the notion the only thing right with the Ghost Rider film on which the artwork is based was the visuals, it’s a sweet coincidence the name of the company whose fleet it is apart of is 'Beau' – a French word for beautiful, because it sure as hell is.

(Story and images via here and here)
Posted by IADW at 3:11 pm