"Your lecturing me about grays Lobo? I watched my city die." "You still cryin' over that? Maybe this place has got a tissue."

There are few books that remain dependable monthly reads for four and a half years straight, but that's exactly where Green Lantern #55 leaves you. And Hal Jordan's not even the first green energy based hero that appears within it's pages!

While I haven't always been a fan of Lobo, the intergalactic bounty hunter that drops in to collect the head of Atrocitus, I love the concept of The Spectre. Seeing him kick things off on the trail of the Red Lantern Corps' 'rage' entity, was a sweet surprise.

The main throwdown of the issue between Lobo, Atrocitus and the three united lanterns that come to his aid, proves the evolution of artist Doug Mahnke's skills. The first five pages alone contain two double-page spreads, that serve as a one-two-punch for the eyes - see? 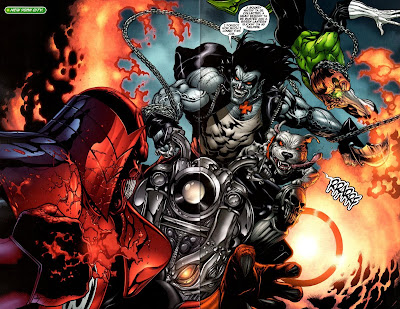 Storywise what really makes this bird sing, long before Lobo's true motivations are revealed, is the character interaction and humour. Geoff knows the humourous perspectives outside eyes can have on the world of Green Lantern, and no one gives him a better outlet to poke fun at these aspects of his own work, in continuity, than Lobo.
Lobo's brutal confrontation with Hal Jordan, Carol Ferris and Atrocitus isn't all L-O-L moments. Initially when I heard one of DC's ultimate villians would be aligning himself with the heroes he usually opposes, I feared a watering down of Sinestro's sinister nature. No need. In under three pages, the arrogant antagonist oozes cool, showing the book could easilly be re-titled in his name and still rock the Casbah. 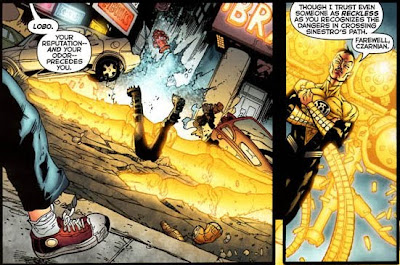 Then, the origin of wild-eyed killer Dex-Starr is revealed in a teary eyed back-up story. 'Who's Dex-Starr' you ask? He's this little fella;

Yip, you better believe it, while nothing revolutionary happens in this issue, anything, and I mean anything can happen in Green Lantern. Plus, like fellow Geoff Johns book and close contender The Flash shows, when you do the basics right and this good, every issue will always deliver.
Posted by IADW at 10:04 am