If there's a few dinero rolling round loose in your wallet at the end of the month, and you're thinking of adding an extra purchase to your July pull-list, here's three quick-fire reviews to help steer your spare change in the right direction. 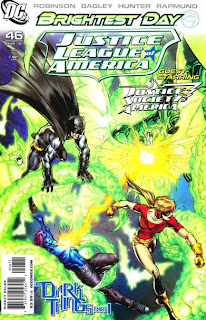 JLA is my automatic purchase regardless of creative team, but after this issue I'm wishing it came bagged with a free Panadol. Sure the art is starting to convey the 'epic', but the book has a serious overkill of multi-coloured thought boxes. Keeping track of who is thinking what, where, seriously detracts from the dialogue and the story, which despite being a JSA/JLA crossover isn't all that strong to begin with. ***** 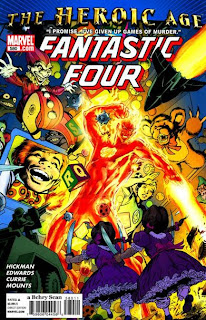 FANTASTIC FOUR #580
Jonathan Hickman's writing *****
Neil Edwards' art *****
Is it odd to love an issue more for it's sub-plots? Here, the Human Torch fills in for Franklin's 'too busy dad' and ends up male-bonding with the little guy and Leech, during battle with X-Men villain Arcade and The Impossible Man. Meanwhile, Reed gets schooled by the brain-box 'Future Foundation' he has assembled, who in their first assignment have found a temporary cure for The Thing.
Add to this a planet of Ultron's, dreams of serving Galactus, and a mind that downloads 640 years of data while another takes over a planet and you know big things are ahead for the Fantastic Four. ***** 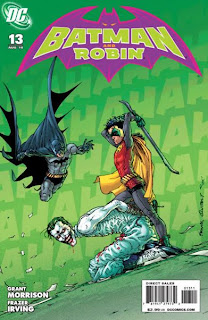 Wow - what an issue. Starting with Thomas Wayne's depravity, Grant Morrison hits the ground running and continues to accelerate, by revealing the clues he has seeded throughout his run on the various bat-titles.
As the pennies fall, Dollotrons invade and the interogation of the Joker continues, Frazer Irving blows the cover off the book with every page of his amazing art. 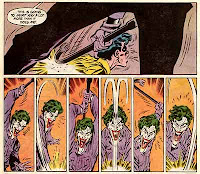 Pulling double duty as the colourist, he creates the perfect atmosphere - especially when the latest Robin decides to mark the original death of 'Robin' Jason Todd (left), by giving the Joker a taste of his own medicine, below. 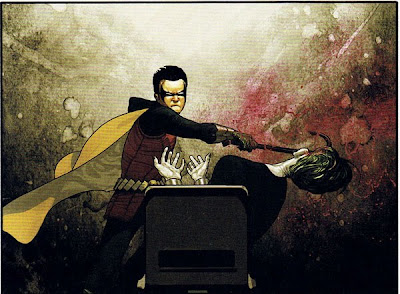