Ross and Busiek Give Kirby Fans Something To Marvel Over

Alex Ross, master of the paint-box Crayolas, has announced the writer teaming with him on KIRBY: Genesis will be his Marvels partner in crime; Kurt Busiek. 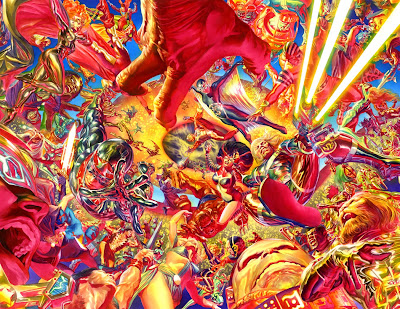 When I first heard the superstar painter was tackling the lesser known legacies of Jack Kirby, I have to admit I was a bit apprehensive. Firstly touching Jack Kirby's material is like covering a song by Queen - your intentions maybe great, but you can often end up messing with forces beyond your understanding.
Secondly, the projects success hinged on the interior artist. Alex Ross co-plotting and covers is one thing, but the interior artist needs to really evoke 'Kirby' to make KIRBY: Genesis feel like KIRBY: Genesis. Steve Rude springs to mind, but that's wishful thinking.

Now though, Kurt Busiek as writer has changed all that. Not only did he pen Marvels, but he scripted a gigantic chunk of the most prized parts of my comic collection. These include; The Power Company, Thunderbolts, Astro City, Conan, Untold Tales of Spider-Man (probably the best Spider-book ever), a stellar run on The Avengers, one of the best ever runs on Superman, and his highly-overlooked start to the sword and science remake that was Aquaman: Sword of Atlantis.
In short; if Kurt's name is on it, it's the closest thing to a 'guaranteed great read' you can find in this industry. Guess that means I'm picking up my first book from Dynamite Entertainment. How 'bout that?
Posted by IADW at 9:15 am