A WINNING HAND: Saluting the Work of Nick Cardy 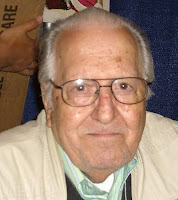 There are many posts the world wide web over, promoting the well-deserved and remarkable achievements the likes of Jim Steranko, Jack Kirby and Steve Ditko brought to the comics medium.

Me, I want to give a little space to an artist I feel often gets the short end of the stick when people chuck on their hindsight coloured glasses – and that’s Nick Cardy.

Originally I was going to do the WWII veteran’s work as one of the Sunday Making a Mark segments, but that kind of defeated the purpose. Nick wasn’t just DC’s mid-70's cover artist or ‘that Teen Titans guy’ - he was an artist whose level of creativity and design was well ahead of much of what was around him at the time. Heck if some of his covers were fresh on stands today they'd still be the ones my wallet leans to.

From the early 40’s to when he left the comics industry, Nick’s work was ground-braking yet all-ages friendly, and when he worked the cover captions or masthead into his artwork - well, he just went beyond Thunderdome... And then there were his interiors...
Even today, I have pages of his work printed out and scrap-booked in amongst other great pieces from all kinds of media and mediums, that I use as inspiration. No matter what Nick's art is placed beside within these books, it always stacks up and stands out.

So here's to Nick Cardy, a small blog post to an enormously talented man, and still just a drip in the ocean of recognition he deserves.
(For a cool interview with Nick Cardy himself visit povonline.com)
Posted by IADW at 5:00 pm