This week as part of Comic Con' DC released the first official teaser of a live action Blue Beetle. But before we look at that little beastie of fiction turned reality, how 'bout we take a gander at the best 'Blue Beetle's' from the world around us, starting with this wee chappy... 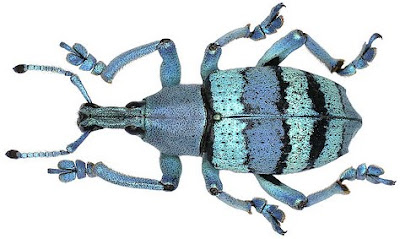 Eupholus amalulu Porion are weevils whose strong stomachs mean they can chew through leaves other insects find poisonous. To see how your stomach can handle the other blue-beetle-beauties, plus the Blue Beetle live action teaser itself, click through to the next page.

Acmaeoderella villosula (left) helps prove nature's still trumps when it comes to the term 'Blue Beetle'. Doesn't mean DC's Blue Beetle live-action series is far off. Not with sweet teaser spots like this, that's for sure;