One of things I always loved about the Asterix books was the lengths Obelix would go to to feed on roast boar. Now it seams the Gaulish duo, Dogmatix, Cheif Vitalstatistix, Cacofonix, Unhygenix and all the crew are swapping boar for burgers, by replacing Ronald and Hamburglar as the face of McDonalds in France. 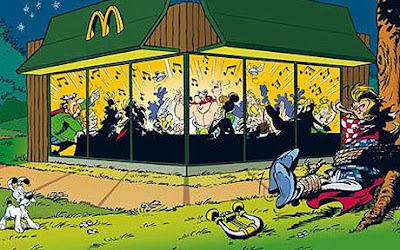 The new advertising campaign plays off the book's infamous end scene of the bard being tied up as the rest of his tribe dine merrily, with 'party central' now inside the golden arches. Branded "Come as you are” it is the brainchild of advertising agency Euro RSCG, and drawn by Asterix co-founder Albert Uderzo’s studio, under his consultation.

Fan’s though – not so happy. “Sirchamallow” blogged at Le Poste, his childhood hero had been “sacrificed like a wild boar”, and while he is not alone in his sentiments, Albert René who own the rights to the characters say they haven’t “sold out” because in the past they have even turned down offers from Diet Coke, because the product didnt "correspond to the values” of their characters. 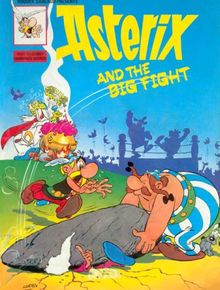 Me – I think it’s a pretty ballsy move by the fast food giant, in trying to brand themselves as French institution, that just happens to be American, in order to maintain what is their second most profitable market outside the US.
The exposure could get more folks to pick up (or re-pick up) the books, and if it’s not a permanent thing – it should be sweet. Plus if McDonald’s worldwide gives off Happy Meal Asterix figures as a result, then I for one would deffinitly be lining up as many kids as I could in order to get the whole set.
(Via)
Posted by IADW at 11:10 am