He's been Hannibal King, Human Torch and Deadpool, but before his Green Lantern-lit face gets plastered over every kind of merchandise known to man, Ryan Reynolds is going to be Buried - alive.

Playing truck driver Paul Conroy, Reynolds wakes up to find himself 6 feet under, with 90 minutes of oxygen, and a mobile phone and lighter the only tools he has to make like MacGyver and escape certain death. Fans and claustrophobic's loved the film when it debuted earlier this year at Sundance, but what's really causing some mad love are the film's teaser posters. Check these out; 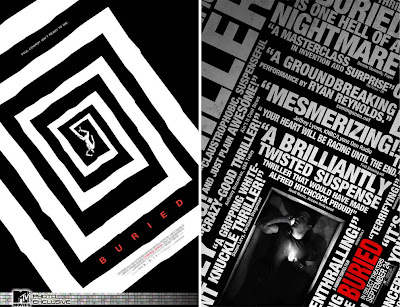 The one on the left hails from MTV, while the right is from the folks at AICN. Now all I want to know is, buried under 2500 ponds of soil and he's still got reception? What network is this guy on?!
Posted by IADW at 10:01 am