Lord knows I like me some Havok. Easily one of the coolest X-Men around, I even named Alex Summers as part of my 'dream Avengers line-up' a few months back.

Now that producer Bryan Singer has jumped on the phone and had a good yak with the folks at AICN, comes confirmation of a role reversal of sorts. Havok will star in X-Men: First Class, but his spotlight-hogging brother Cyclops, and his eternal flame Jean Grey will be absent.

While it's a bit hard picturing an X-Men: First Class with out the two mutant lovebirds, it is great exposure for Alex. Want more? A run down of all the rumoured actors and roles he confirmed, as well as a few other key plot details await you, right after the click-through.

X-Men: First Class is going to take place in the J.F.K/Martin Luther King era. A perfect backdrop for the battle over mutants rights, the film will also have a global feel, with locations in England, the U.S., and possibly even The Soviet Union represented.

Bryan called Mathew Vaughn's film "a new beginning" rather than "the conventional First Class comic". He then promised a glimpse of the film's "far more comic bookish" costumes within the month. With production starting on August 31st, Singer confirmed that these 'rumoured' people are official in their roles; 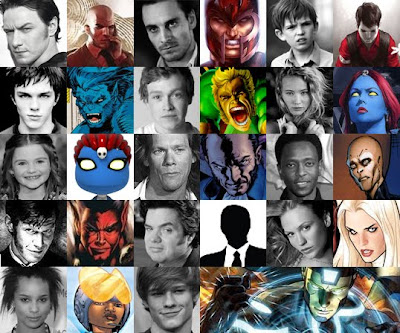