DAREDEVIL REBIRTH? What Next For The Man Without Fear? 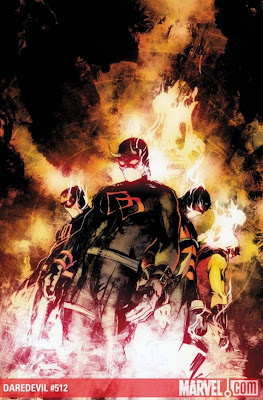 It’s a Daredevil tradition to leave the book in a situation so muddy the new writer is going to have to really dig to pull ol’ Hornhead out of it. But current Daredevil scribe Andy Diggle is piling mud up so high around Matt Murdock, it seams Marvel’s going to have to end the series to hose him down.

What mud you ask? (Spoilers) Well if you haven’t dropped some light on the current Shadowland event, Matt Murdock has jumped into a cool new black set of duds, declared martial law in Hell’s Kitchen, and built a big freakin’ ninja base on the same site Bullseye levelled in a previous battle, killing hundreds. And that Bullseye dude? He’s dead too – Daredevil ran him through with a pair of sai’s Elektra style.

While most "seemingly possessed" heroes can have dark patches on their CV while and get away with it (Phoenix, Hal Jordan, we’re looking at you), for a street level hero like DD, this may be a little to much for him to scrub himself clean of – and he’s a lawyer!

As the November solicits show, Daredevil #512 will be the series last, but Bleeding Cool I think is already on the right track, suggesting a Man Without Fear mini-series will follow in December, and lead into a shinny, clean new Daredevil #1 a few months later. 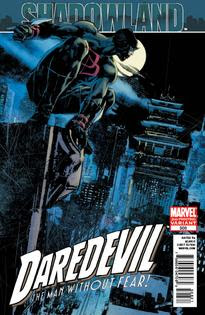 Personally, I hope the mini-in-the-middle plays out with the cast of the teasers Marvel ran a few weeks ago, with candidates like The Black Panther, Falcon and the X-Men’s Gambit vying to be the new Man Without Fear.
If it ran like Reign of the Supermen, where you had to ‘guess’ who the true M.W.F would be as the series built, the 'House of Ideas' would find it the ultimate mud-remover – one that turns it into green, green, grass.
Posted by IADW at 9:30 pm