One of the 'super powers' I've learned is that if you 'skip' just as the playground battle begins in the movie Daredevil, it substantially increases the quality of the film. One thing I never skip past though is the DVD's The Men Without Fear extra-feature, which chronologically talks to some of the biggest names to work on the Daredevil comic, like Gene Colan, John Romita and some guy named Frank Miller. 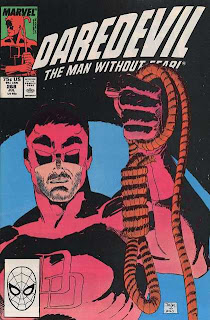 Honest and raw, as only the men versed in the codes of Hell's Kitchen can be, my favourite slice goes to John Romita Jnr. Not only is the dude one of my top three illustrators, the comic which introduced me to his work and Daredevil himself (#268) is included in the video!

It's an awesome few minutes, with a down-to-earth guy and his thoughts on comparisons to his father, Daredevil, being a comic book artist, and the 'deadline style'. Check it out for yourself - just make with the click-click.