You know how sometimes you can like a character, then you come across something that shows you that dude or dudette in a different way, and you think 'Wow that character's not just likeable, they're frickin' awesome!' No? Just me then? Fair enough. Actually right now that's me and Marvel's Luke Cage. 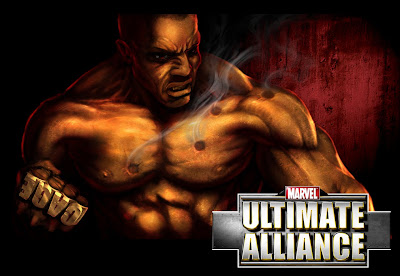 I've always thought the hard-skinned Harlem heavyweight was cool, but now after sitting down for a very rare round of PlayStation I think he's... well, 'Brian Michael Bendis likes Cage' level of cool.

The game? Marvel Ultimate Alliance, and while I clocked it many moons ago, one recent sleepless night I plugged it in to play as characters outside my usual Fan' Four picks. Despite having Daredevil, Black Panther, and Spider-Woman onside, after getting hip to Cage, I'm now playing through with 'Retro' Luke in pole position only, and pitting him against Doctor Doom and the Masters of Evil. 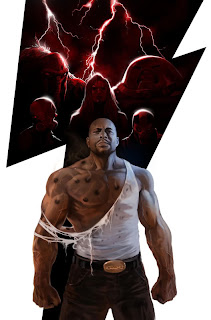 My personal favourite move, the 'Hammer Toss' where Cage uses his strength and endurance to pick up an opponent, swing 'em round and release them. Especially when the game tops it off with the sound clip 'Stay down or get beat down'.

Yip, Cage now fits easily on my top Marvel characters list. Maybe it's time to give his run in Thunderbolts a look see too. Hey, he's only been in there for two issues, and if it's got Luke mixing it with the unstoppable Juggernaut, then it can't be all bad news.
Posted by IADW at 10:00 am