Every Sunday, Making A Mark features one of the insanely talented artistic folk, currently living up large on the pages of deviantART.com. Selection is simple; search for a visual character, pick the greatest visual, then give it's maker a little brag spot right here on IADW. 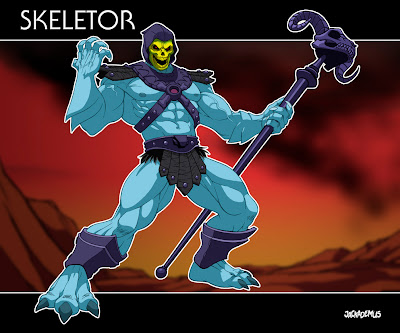 Skeletor by Jack Lawrence aka dA's Jackademus
As a Masters of The Universe fan, it always annoys me when I see Skeletor drawn as some skinny, emo-looking character. He's meant to go toe-to-toe with He-Man, the most powerful man in the universe! Finally in this pic from Jackademus you can see him doing just that.

For more MOTU goodness and a bit of Nightwing, check this out...
Having worked on the likes of Lions, Tigers and Bears for Image Comics, Jack has an awesome balance of minimal linework, and strong vibrant colours to his style. 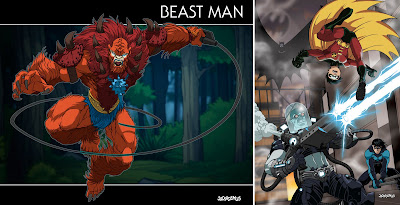 As a result that 'Beast Man' is the best pic I've ever seen of the character (top points if you remembered it from the IADW masthead). Again, many draw B.M as a bit of a clueless brute, but here you can see why he's one of his bosses top forces!
The Batman and Robin piece is a collection of the UK illustrators favourite characters, and if you missed it earlier in the week, you can catch Jack's own 3D version of it right here.
Left with a scratch only seeing more Jack Lawrence art can fill? Check out the guys portfolio at deviantART right after the jump.
Posted by IADW at 10:00 am