If there's a few dinero rolling round loose in your wallet at the end of the month, and you're thinking of adding an extra purchase to your pull-list, here's three quick-fire reviews to help steer your spare change in the right direction. 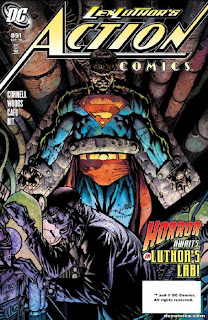 Mr Mind takes Lex Luthor for a swim through his own self-perceptions to see who drowns first. Not only is Mr Mind a little green bug-like dude, he's one who pulls a gun on 'Lois' and threatens to "Blow her mind" Yip, gotta love comics!

Speaking of 'Lois', Lex's latest bodyguard robot duplicate of Mrs Kent threatens to steal 'best new character of the year'. Not only does she give Lex a different perspective and delivers some really sweet lines, she leaves you wondering how he existed before her. ***** 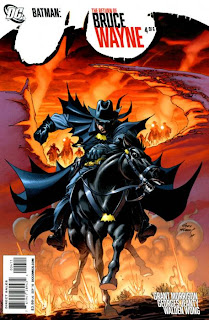 I'm a Morrison Madman - I eat up everything he does, but I've just put down the 4th issue of a series I waited for, and I just don't get it.
The clash that should be between 'cowboy' Bruce Wayne, Vandal Savage and Jonah Hex isn't, in part due to some really confusing art. Thankfully the building mysteries of the series leave hope that while this issue didn't prove there was gold in them thar hills, it does hold hope the remaining two will strike paydirt in future. ***** 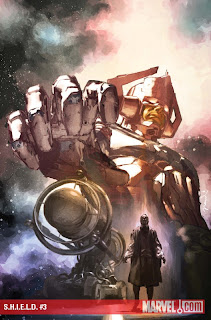 This book was fantastic before, but now it's in a class of it's own. I mean, when you are using Galileo vs Galactus as a sideline only, you know the guts of the issue are going to be pretty damn impressive.
As a traitor to the traditions of earth's greatest minds stands revealed, Dustin Weaver continues to prove he's comics best kept secret, with art that almost redefines the medium. If Disney aren't already looking at the movie potential of this book, they really should be soon. *****
Posted by IADW at 10:00 am