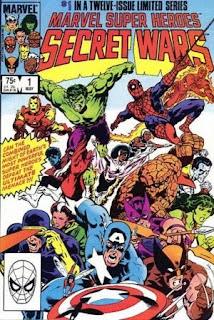 You all know Mike Zeck's historically awesome cover to Secret Wars #1 don't you? Here in NZ, we received both the U.S issues, as well as the U.K oversized versions, with Zoids back-up strips.

Somewhere along this line, I remembered an image of the famous composition with Thor and Mr. Fantastic flying high, where the book's logo traditionally sits.

It made sense, they were the only 'big guns' not in the mix, but with no google-able visual proof I decided to ask Mr Zeck himself if this version existed or if it was just a trick of a memory that's read one to many comics. He replied;

"Yep, they were up there on my original version.

Knowing that the art for cover #1 was going to be used for an advertising poster as well as the comic cover, I threw everyone on there for poster purposes. Logo considerations caused a couple of the top characters to be trimmed out on the cover itself."

Yes, validation! And with that I was finally able to track down this; 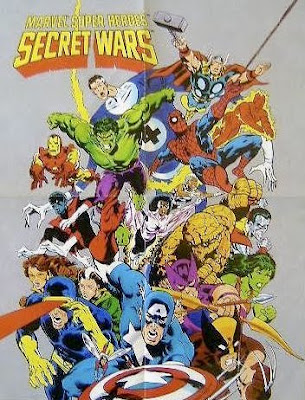 Notice Shadowcat also peaks her head in on the left, yet never appeared in the series as part of the heroes collective! Thanks again goes to Mike Zeck, the man that got me addicted to Captain America, for his time. The fact the net can put you in touch with the your all-time favourite comic book creators, is pretty durn sweet.
Posted by IADW at 10:00 am