Without writer Brian Michael Bendis, Spider-Woman's fate could easily have been that of 'iconic nick-nack' gathering dust on the mantle at the House of Ideas. Instead the scribe provided just enough of a butt-kick to get Marvel to polish Jessica Drew off and put their potential first-lady in a much better position.

Now with an ongoing role in the Avengers, it's time to spin back through the web of the arachnid amazon and see what six covers her pheromone based powers have made the most attractive.

Click through the break to see candidate numbers 3 to 1! 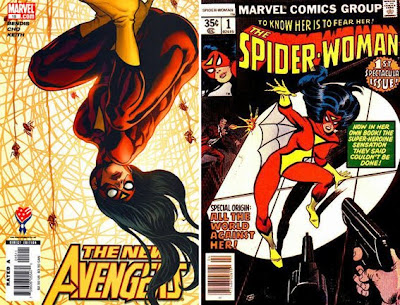 3) The New Avengers vol1 #15 Frank Cho When she looks this good who wouldn't having Spider-Woman climbing their walls?
2) Spider-Woman vol1 #1 Joe Sinnott Iconic and eye-catching - few have nailed the mask, or character as well in the years since. 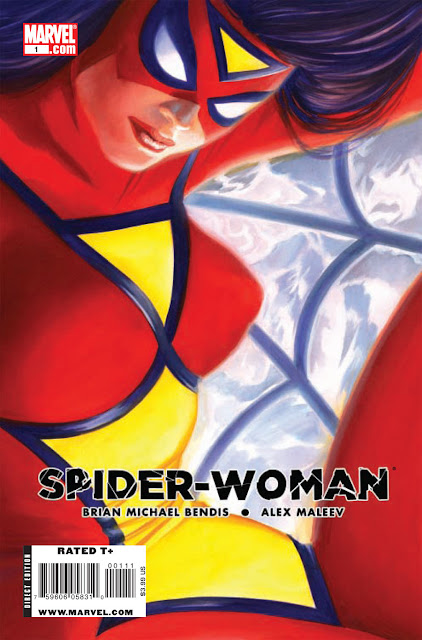 1) Spider-Woman #1 (Agent of S.W.O.R.D.) Alex Ross Variant Who hasn't this guy done a defining image of? Here by zooming in on Marvel's lady in red, Alex not only nails the costume, he captures the alluring aspect of the avenger, with only her web-wings for contrast.
Posted by IADW at 9:08 pm