THE USUAL SUSPECTS:
Which Of The Fantastic Four Will Die? 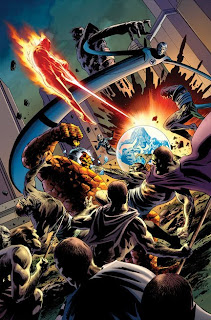 This time next year there won’t be a Fantastic Four book at Marvel.

That is just one of the bring-back-Bucky level of changes heading the way of Marvel’s first-family, and it all kicks off in September’s Fantastic Four #583. While you can get the run down of Marvel’s "next big thing” here or here, what you need to know is Doom’s back to stay, Steve Epting’s on pencil duty and one of the four will croak before the storyline ‘Three’ is over.

From where I’m standing, it’s just great seeing writer Jonathon Hickman’s run on Fantastic Four getting this much press. It’s monthly guaranteed satisfaction in print, with two staples. As for who is going down the gurgler, my money is sadly on...
...the Human Torch. Reed's already 'died' once, taking out The Thing would be like the Rolling Stones without Mick Jagger and Sue... well I just don't think it's her time. So as concrete as that evidence is, sorry Torch I think it's your goose that's cooking.

I also don't think just one member of the foursome is changing either. Gut instinct says the death will cause more of an upset than that. That's okay though - it's not like the foursome haven't played musical chairs before. Just look at this; 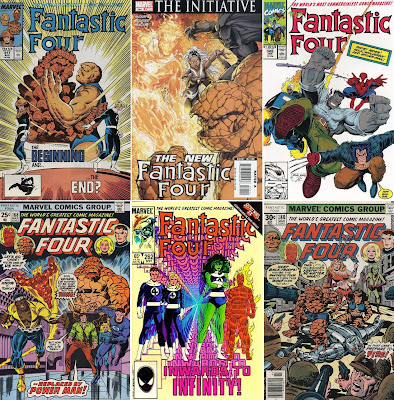 Now that's done, who of the four do you think is taking the big dirt nap?
Posted by IADW at 4:37 pm