What Is Your Birthday Comic?

There's quite allot of 'cool' in amoungst the rants, ravings and wisdoms of the CBR forums. Recently daveageallen posted the question 'What issue of your favourite DC comic came out the month/year you were born?' Feeling like that was a question worth looking into, I dug back to find what my four favourite heroes were doing in May 1979 - and you'll never guess the milestone I struck; 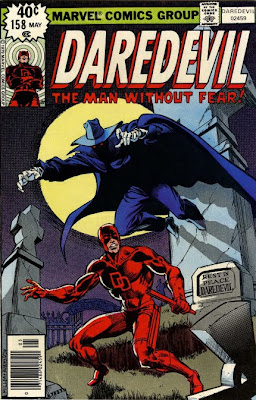 Daredevil #158 (A Grave Mistake), was Frank Miller's first ever issue of the series he would define with his noir-pulpish style. How 'bout that - I knew the greatness of my birth month would have a flow-on effect! 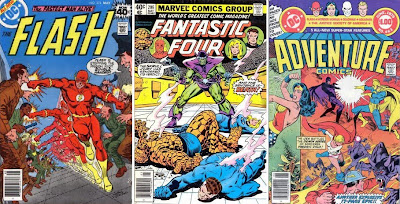 As for the others, fellow red jump-suit wearer The Flash, was quelling a prison riot solo in The Flash vol1 #273 (Harvest of Hate), the F.F. were put on trial by the Skrull in Fantastic Four vol 1 #206 (The Death of The Fantastic Four), and Aquaman, while not having his own book in '79, appeared in Climax inside May's Adventure Comics #463 - which also included a strip on The Flash as well!

I could keep on hunting down the others too, like Hawkman, Cap and the JLA, but hey you've got to draw a line somewhere. What about you? Where was your favourite hero on the month you were born?
Posted by IADW at 10:00 am