LISTEN UP BUB: Wolverine Gives The Lowdown On His New X-Force Buddies 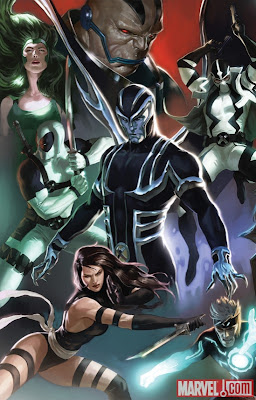 You know if I could be any X-Man I'd be Archangel. Not the 'wings like a dove version' but the 'blue-skinned'n'metal' Warren Worthington III. It would just be a kick to soar up high on metal wings, then land and pop them outta sight like the ultimate Swiss Army knife.

Nightcrawler would come a close second (or for work purposes Jamie Madrox) but if I ever found the fanboy dream genie, Archangel would be my pick.

That's part of why the new Uncanny X-Force line-up has me stoked. For years Warren was treated as a B grade X-Man (maybe even C), but after his comeback in the last X-Force series his stock is flying higher than ever. Now with Wolverine, Psylocke, Fantomex, and Deadpool at his side, things are really set to fly.

Amping up the anticipation, those mad folks at Marvel got Wolvie to voice this brand spanking new video teaser, just to give you the inside info on what the new crew will be up to when Uncanny X-Force debuts this October. Check it out;

Labels: My Thing For Psylocke, X-Men