With Hulk, Beast, Valkyrie and many of the old crew riding high in the world (or is that worlds) of Marvel right now, you'd think 2011 would be a good time for a new Defenders series to strike, while the proverbial iron is hot. Luckily that's what LooseCannon asked Marvel's VP Executive Editor Tom Brevoort over at CBR and here is Tom's cool-inducing response; 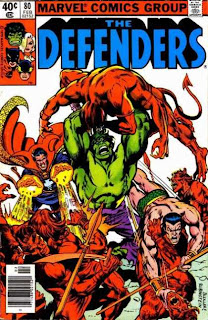 Defenders is one of those series that we’ve been talking about a lot, Axel and I, so I wouldn’t be surprised to see some movement on that front in the near future.
By that same token, we’re going to want to feel confident that we’ve got a pitch that captures the essence of what people loved about the Defenders in the past (without being manacled by faithfulness to the old title) before we green-light anything. But stay tuned.
I would be all over this book.
While a 'best of the past line-up' is what I'd love to see kick things off (written ideally by Kurt Busiek), you can click through to see the starting eight I'd chuck up, if asked to create a non-team not "manacled by faithfulness to the old" .

Hulk: A no-brainer - Hulk is one of pulp's best creations. Ever.
Namor: Namor opens up all the treasured areas of Marvels past. Plus seeing how his attitude rubs up his team-mates is always good readin'.
Dr Strange: It simply wouldn't be the Defenders without him.

Cloak and Dagger: C&D are key Marvelittes looking for the right fit. Chuck them in the non-team lock and you might just see them click.
Spider-Man 2099: The best of 20-99, his addition gives a good excuse for a bit of time travel, and enough edge to bring something more to the table than his namesake. Plus that costume just flat out rocks.

Sleepwalker: Old Sleepy opens up new realms to explore, adds novel powers and perspective, plus I just really like the idea of Rick hanging out with the guys during 'awake time'.
Deathlok: When's adding a cyborg ever a bad move? Not quite Punisher-dark, Deathlok adds a tonne of firepower and espionage. That Namor attitude I was talking about -  that stops with him.

Okay, that's me done. Who are your random eight?
Posted by IADW at 8:34 pm