PANEL-BEATER: Comic of The Month

"We just saved your hide Darlin'. Least you could do is display some gratitude" 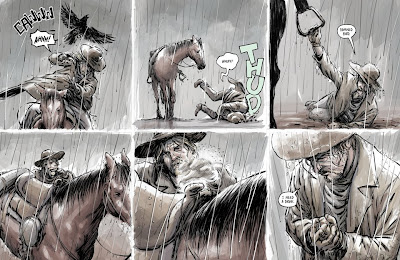 When wanted gun-man Franklin 'Breakneck' Kelley walks into town, the drunken gunslinger just wants a little anonymity. Fat chance. With his trigger skills quickly uncovered, Frank soon finds himself joining a mysterious posse at the Sheriff's request, and setting out into a supposedly haunted patch of desert, to hijack a stage coach before it reaches it's destination.
As the mighty Shoushan and the flirtatious Pearl cross the posse's path, a darkened gang roams the countryside lead by the iron-fisted Colonel Bale. In their possession, the Dragoons have a strange boy who miraculously walked out unharmed from his family home, after Bale had it burnt to the ground. Now Bale and the Sheriff's men look set to meet and not even a wagon full of gunpowder will match the explosions when they do. 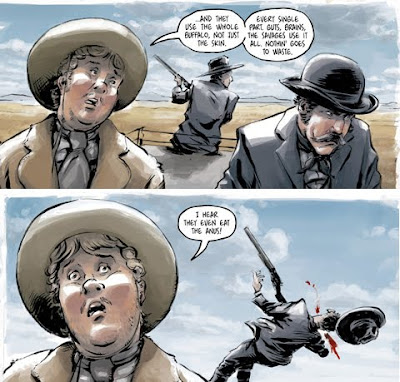 Firstly, I could count on one hand the amount of artists I have seen with the knack for body language and facial experessions David Wachter has. He is unbelievable behind the pen. From sweeping shots of the wild west to dynamic page designs, he nails them all.
Joined in scripting duties by James Andrew Clark, you feel like these characters and their world are fully fleshed out, despite the series only being up to chapter three, of book one.
Best of all this comic just feels fresh. It's bright and colourful fun, and while everyone has a gun, there's no gratuitous death to be seen. It's a good old western tale, with a touch of super-power here and there, and if you've got a few seconds up your sleeve you should definitely mosey on over to give it a try (jump).
Posted by IADW at 9:00 pm