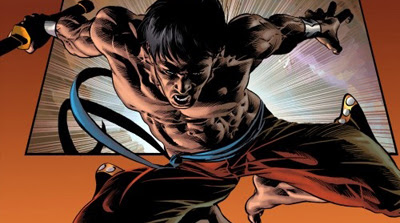 You know you're getting on in life when reading the current crop of Avengers comics you're left thinking "This really ain't my cuppa tea".

However, all is not lost for the franchise that's got you using your parents phrases, Secret Avengers has been mixing together great characters, plots and art for five issues now, and as the just released teaser for issue 6 shows - it really is the perfect blend.

What's unintentionally cool about the preview is it runs without any of the wordsmithery of writer Ed Brubaker, but as it teases the induction of Shang-Chi, Master of Kung Fu to the crew, it ends up coming off like some awesome illustrated Kung Fu silent movie! (Click to upsize)

It's no secret what makes the covert ops team 'pop' here though; the page layouts of artist Mike Deodato Jr! The angles of the panels and the way he plays with the page definitely gets the big 'two thumbs up'.

The books artistic roundhouse kick doesn't stop there. A crazy four variants are planned for this ish, and in a rare bout of luck all three revealed so far are fit for framing! Check these out; 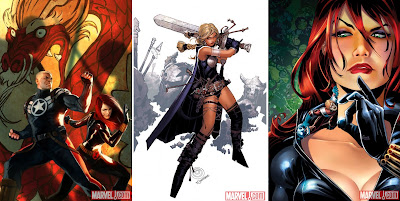 Marko Djurdjevic, Chris Bachalo or Amanda Conner - whose to choose?
Secret Avengers #6 hits 27 October 2010 from Marvel Comics.
Posted by IADW at 7:19 am