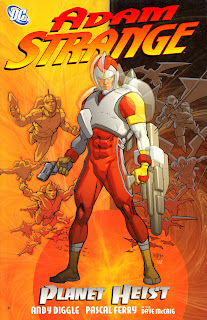 Across the blog-o-verse today something pretty big is going down. Read This Too - an event where a bunch of us are bashing out reviews on our favourite books outside the normal 'top sellers', for you to take a look at. Me? I'm running with a book that's as cosmic as they come, DC's ADAM STRANGE: PLANET HEIST.
Like Indianna Jones, Adam Strange is just your average guy. An Archeologist (why does all the cool stuff happen to them?), who happened to be hit by a Zeta beam and whisked away to the planet Rann. There, in between pinging back and forth uncontrollably, he married, had a kid, and due to Rann's weakened gene pool, was given a laser gun and jet-pack and told to save their world. 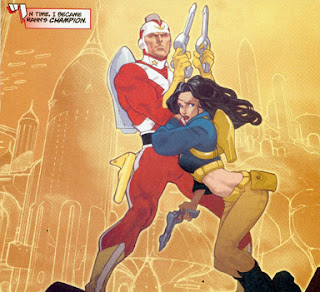 Jet-packs, laser guns, alien worlds? It's like the ultimate pulp fiction adventure huh? Well Adam Strange: Planet Heist, starts off with the news he has failed. Rann is destroyed. Burnt to a cinder in a giant super nova, Adam's worlds are literally crashing down around him and worst yet the universe thinks he's involved.

Still, like any hero who flies around with a combustible engine strapped to his back, Adam pulls himself up seconds from mentally face-planting into the ground, takes the affirmative and begins tracking the bounty-hunters that pursue him for answers.
What he uncovers leads to this book becoming the unofficial first part of DC's then mega-event Infinite Crisis, as Adam realises Rann hasn't being destroyed - it's been space-napped, and what's more, the Thanagarians are involved. Trials, betrayal, exectutions, death cults, The Omega Men, dark gods and darker women all lie ahead before the truth will be found. 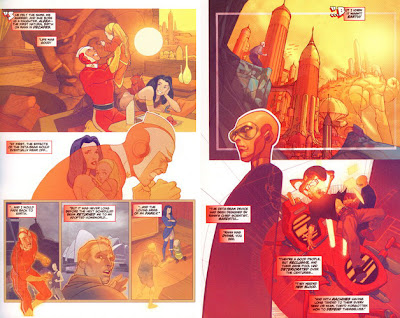 If that all sounds like Andy Diggle writes the hell out of this book from the very first page, your bang on. Famous for being a 'street level writer' thanks to the likes of Daredevil and The Losers, he proves here his talents are more at home in the stars.

By slowly introducing each bit of such a cosmic concept, he has time to play down the campiness of the situation, while spinning a massive conspiracy plot that will leave you guessing at every turn. Using Adam's 'never give up - even in the face of a super nova' attitude to anchor the tone, Diggle keeps the human in the 'super-human' and the drama at an unbeliveable high. 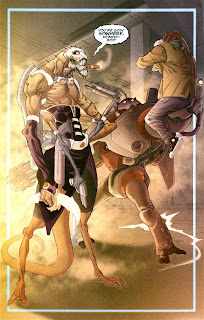 Speaking of high, you can't have read this far without spying the other trademark of this eight issue mini-series - Pascal Ferry's Blade Runner-esque artwork. Once you've seen it your eyes never let you forget, his stuff is that good.

Boosted by the colours of Dave McCaig, not only do the duo handle the large scale with the intimate and render aliens and futuristic cities in a way that puts most other sci-fi to shame, they give Adam Strange himself an overhaul, updating his look, weaponary and tech to the edge of modern pulp fiction.

Sure, Planet Heist isn't your Grand-Pappy's Adam Strange - but trust me, it rock'n'roll's just the same. 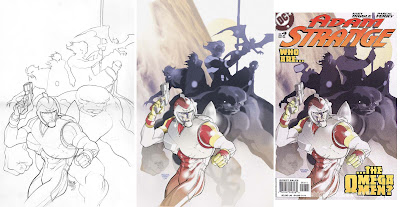 A big thanks has to go to Kelson over at Speed Force for the idea, and to all the other bloggers involved in making READ THIS TOO happen, it has been an awesome experience to be part of!

Interested in reading more? Good! Check out the lesser-known titles reviewed in these other blogs and Read Them Too!: