THE TOP 6 COMIC COVERS FOR STEPHEN KING'S 'THE DARK TOWER'

If Supes is the 'Man of Steel', Stephen King must be the 'Man of Milestones'. In 2007 the noted thrill writer brought his The Dark Tower series home to the House of Ideas. Now in 2010, King has signed a deal with Universal Pictures and NBC to simultaneously release a film trilogy and TV series based on the adventures of Roland Deschain.

The team behind The Da Vinci Code movie are tapped to adapt the 28-year old plus franchise, but what's really sweet is the projects planned timetable. Check this; the first movie will be followed by the first series of the TV show, then the second movie, and then the following TV series' will serve as prequel material, before wrapping up with the third feature film - cool huh?

With that in mind, now is a great time to flip back trough The Dark Tower's history at Marvel, and see what six of it's iconic covers, best send shivers up your artistic spine. 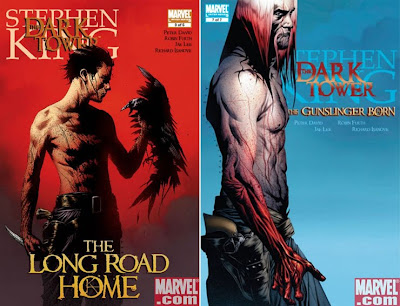 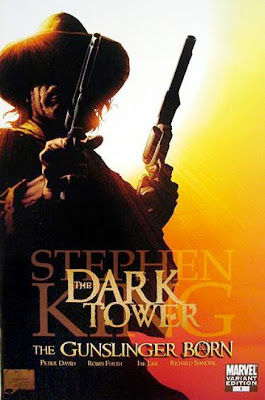 For more on The Dark Tower movie and TV plans, visit Deadline.com
Posted by IADW at 1:38 pm