BY YOUR JIM LEE LEGION OF SUPER-HEROES VARIANTS COMBINED 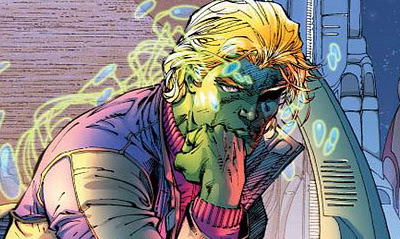 In 2008 Beyonce said "if you like it you shoulda put a ring on it" and pop culture was never the same. DC, having already done the ring give-away, have now moved on and instead prefer to wrap books they like with a Jim Lee variant as their chosen 'cherry on the top'.

The latest Legion of Super-Heroes title has been soaking in Lee penned variants since it's launch, but did you realize they all slot together?

God bless inter-connecting covers. While these were sold out of order, they all snap together to form a giant run down of the history of the team, and each of it's distinctive eras. Left to right those are; Superboy, 50s era (#2), Chameleon Kid, 60s era (#3), Saturn Girl, 70s era (#1), Timber Wolf, 80s era (#5), Mon-El, 90s era (#4), and released today Brainiac 5, modern era (#6 - out this week!).
As my LCS hasn't sent one my way in the entire 6 months of Legion variants, I'm hoping DC is planning on releasing this as a poster, if not one inserted into the upcoming Legion Leader election issue.
Posted by IADW at 9:03 am