Every Sunday, Making A Mark features one of the insanely talented artistic folk currently living up large, giving them a little brag spot here on IADW. This week it's super-hero slash villain abstract artist Rogan Josh aka modHero!

An ongoing series of 'wow', Josh self-describes his work as "A design experiment overcome with fanboy hormones gave birth to modHero. It was then retconned into 'Art'." And art it certainly is. If his style alone wasn't enough to make these birds sing, the thought he puts into the scenes involved would. 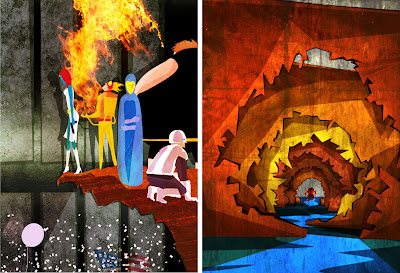 Here, it's not just The Brotherhood of Evil Mutants bashing up the X-Men, it's them on a cliff edge, sinisterly overlooking an Independence Day parade with jail-bars echoing in the night sky.
In a similar vein Juggernaut isn't punching his way though a wall, he's done that over and over - literally. Now you look down the path he's smashed out for himself, and while he's way off in the distance, the 'unstoppable' has never seemed more so. 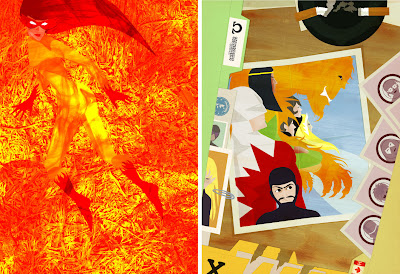 Firestar - because I'm still addicted to anything featuring Fabian Nicieza's New Warriors, and Alpha Flight. Again stepping away from the usual and summarising the concept not just the character, Rogan has the team displayed as top secret intel files.
Fresh takes done in an even fresher style, give each piece a crisp feeling that makes you keep checking back for more. To get your own hit and see how Aquaman, The X-Men, Iron Man and more fear under the same perspective, visit modHero here or on the unstoppable Facebook.
Posted by IADW at 9:48 am