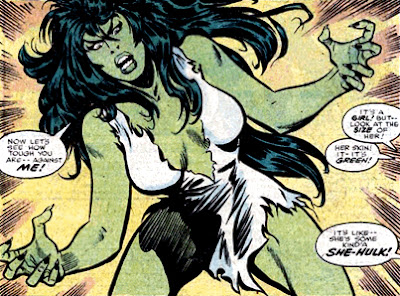 With Marvel heading into the realm of TV land, heaps of characters are being tossed around like a second-hand Mjolnir as to who would be the best foot forward for the House of Ideas, as it plans it's opening slavo on the small screen.

In a recent MTV poll, Heroes For Hire came in at number one, but today I was struck with the notion Marvel might need to go a little more savage. She-Hulk style. 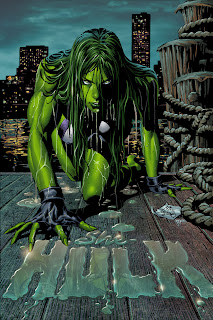 With CSI the small screen version of a Batman comic and getting a new spin-off with every season, She-Hulk would allow producers to mix the same high-end court drama, with the instant recognise-ability and ongoing public love that's thrown the way of the iconic Incredible Hulk.

Adding to this, not only is Jen one of Marvel's biggest as yet unused icons, crying out to be discovered by the masses, she dips her toes into most areas of the Marvel U, which opens up the story possibilities and guest-star potential.

A lawyer that's as fierce on the streets as she is on the courtroom floor? Now that's must see TV!
Posted by IADW at 10:10 pm