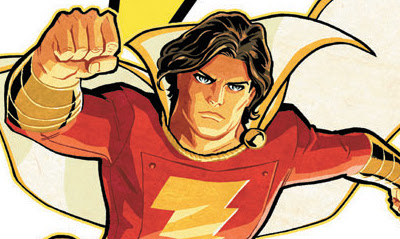 DC are bastards. So much for the New Year's resolution of cutting back on one-shots! Over on the Source blog they have announced a set of one-off's will accompany their January cover event - among them Steel and Captain Marvel! I mean what's a guy to do?

The cover theme is a pretty clever trick too, each cover buying in will feature the books core hero, backed by their unique global lunch-box selling icon. As DC has the biggest and most well known in the biz, this should make for one sweet showing.

On Steel and Shazam, DC also managed to pony up a few details;

Blaze, the current ruler of Hell, has an offer for Mary and Billy Batson that may be too good to pass up! Left powerless, will the two former heroes have the strength to deny the devil? Can Freddy Freeman save them?

John Henry Irons is a normal human being who managed to overcome all odds and become a hero who Superman considers a peer and colleague. What kind of determination drives a man to reach such heights? Find out here as a battered and bruised Steel defiantly stands as the only thing between Metallo and the destruction of Metropolis!

Steel vs Metallo?! How can you not pick that up? Look for the full set of iconic covers in the days ahead, as DC reveals it's January solicitations.
Posted by IADW at 8:44 am